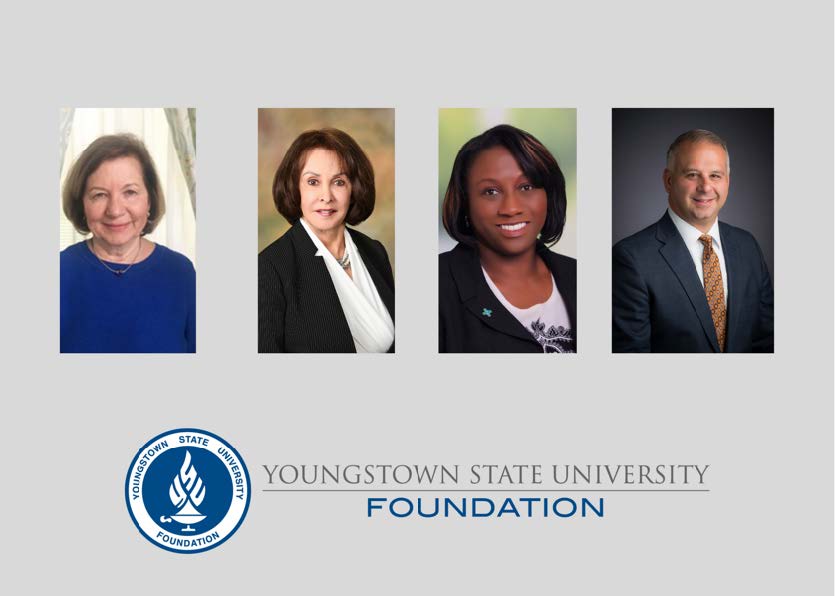 The Youngstown State University Foundation is pleased to announce the appointment of four new trustees to its Board of Trustees, with two-year terms that began o​​n May 10, 2021.

“The YSU Foundation Board of Trustees is thrilled to welcome new members who will champion for YSU students and the Foundation,” sa​id​ Board Chairman Frank Hierro. “Their addition strengthens our existing Board, whose experience and passion for helping YSU and its students enhance the future and mission of the YSU Foundation.”

Nancy Beeghly is a former educator and columnist with the Vindicator. She is a well regarded community philanthropist, having served on various nonprofit and higher education boards and committees. Nancy received her Bachelor of Arts in Education from the University of Mount Union and an honorary Doctor of Public Service from Westminster College. For over 30 years, she has volunteered at the YSU English Festival and was a member of its advisory committee.

Atty. Martha Bushey is a partner with Manchester, Newman, and Bennett. Her career path began as a nurse, graduating from YSU with a B.S.N. She later earned her J.D. at the Akron School of Law. Martha is very involved in community matters through her volunteer services over the years, such as being on the board of directors for Bon Secours Mercy Health, the Youngstown-Warren Regional Chamber and Boardman Civic Association. She is also a graduate of Leadership Mahoning Valley.

Nikki Carter is the Chief Strategy Officer (CSO) of the Samaritan Group Bon Secours Mercy Health. Her background has been substantially in the healthcare industry. These roles include being the Vice President of Cancer Care Services at the Cleveland Clinic and holding multiple positions within Mercy Health. Nikki is a Board Member and Program Committee Member for the American College of Healthcare Executives Northern Ohio Chapter and involved in civic organizations such as the YMCA and Inspiring Minds. Nikki earned a Master’s of Business Administration and Master’s of Public Health, both from West Virginia University.

Scott Schulick earned a Bachelor’s of Business Administration degree from YSU and a Master’s of Business with a concentration in finance. Scott is the Vice President/Investments, AIF (Accredited Investment Fiduciary) with Stifel, Nicolas & Co., Inc, where he works with individuals and other entities on investment planning and management. He is a former board member on both YSU and the Foundation’s boards. Scott volunteers his time as a member of the YSU We See Tomorrow Campaign Cabinet Committee and other charitable causes.