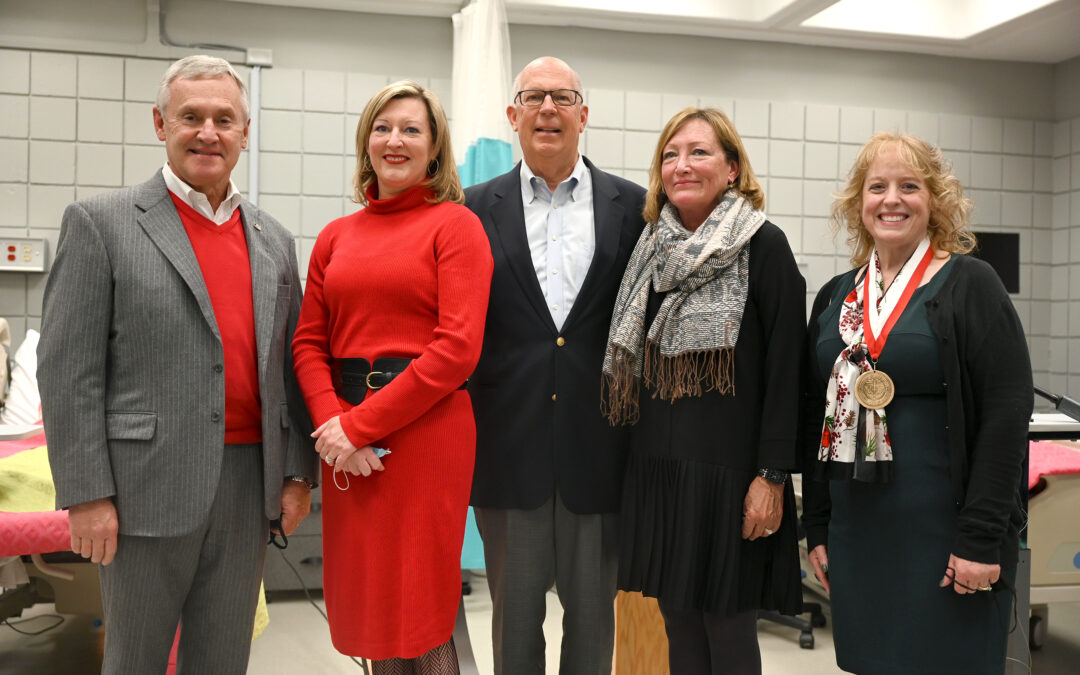 Dr. Amy Weaver, an associate professor at the Centofanti School of Nursing, was designated with the Patricia McGovern Sweeney Professorship in Nursing on Friday, December 17th, 2021.

This professorship was established in 2021 by YSU Foundation Trustee Douglas Sweeney and his daughters Carolyn Sweeney Berry, Andrea Sweeney Wagner, and Alexa Sweeney Blackann, in honor of his wife and their mother Patricia’s lifelong career in the nursing profession.

Patricia was the first in her family to graduate from college. She earned her associate’s and bachelor’s degrees in nursing at Youngstown State University, and her Master of Public Health and Juris Doctor degrees at the University of Pittsburgh. Patricia has always believed that education is the basis for success and has spent a total of 26 years pursuing her education.

Patricia began her nursing career as a staff nurse in the oncology unit of St. Elizabeth Hospital in 1979. Throughout the ensuing 40+ years she has been committed to improving community health. She has held leadership positions in home care and hospice and in community health planning efforts. She has served on numerous local, state, and national boards that have drawn upon her nursing, public health, and legal education. During her tenure as the first female Mahoning County Health Commissioner, minority representation on her staff grew by nearly 20%. She and her team secured more than $3.2 million in local, state, and federal grant funds to institute innovative evidence-based programs to address black infant mortality, women’s and children’s nutritional needs, housing and transportation needs, opiate use and more.

In 2020, Patricia retired from her service as health commissioner, but her service to the community continues through her work as a member of the Board of Directors of Mercy Health of Youngstown and the Community Foundation of the Mahoning Valley. Patricia has been the recipient of numerous awards throughout her career including University of Pittsburgh faculty scholar awards, Youngstown State University Nursing Alumna of the Year, a National Balderson Award, Ohio State University Champion of Public Health Award, The Kresge Foundation Emerging Leaders in Public Health Award, and she was the recipient of the 2017 ATHENA Award, presented by the Regional Chamber and The Vindicator.

YSU is the place that helped jump-start Patricia’s lifelong career in nursing. This professorship will allow for the university’s educators to make a continued and lasting impact on the area.

Dr. Amy Weaver has worked with the university since August 2003, with her most recent position being an associate professor. In addition to teaching at both the undergraduate and graduate levels, Amy has passion for research, especially related to the community and elderly. She has taken a leadership role in the graduate research program and will develop the new doctoral anesthesia research project curriculum.

Amy has taught Nursing in the Community for many years, reflecting the focus of Patricia McGovern Sweeney’s work in public health and as the Mahoning County Health Commissioner. Her overall plan for the funds includes providing health screenings and care to underserved populations where they live in the community by utilizing nursing and other health professions students at the undergraduate and graduate levels, including nurse practitioner students.

This gift follows a long Sweeney family tradition of philanthropic support of Youngstown State University. Douglas Sweeney’s father Robert was the naming benefactor of Sweeney Hall and the Sweeney Welcome Center in 2001. Other family gifts have supported scholarships, athletics, and the arts. With this gift to create the Patricia McGovern Sweeney Professorship in Nursing, the family’s total giving exceeds $1 million.