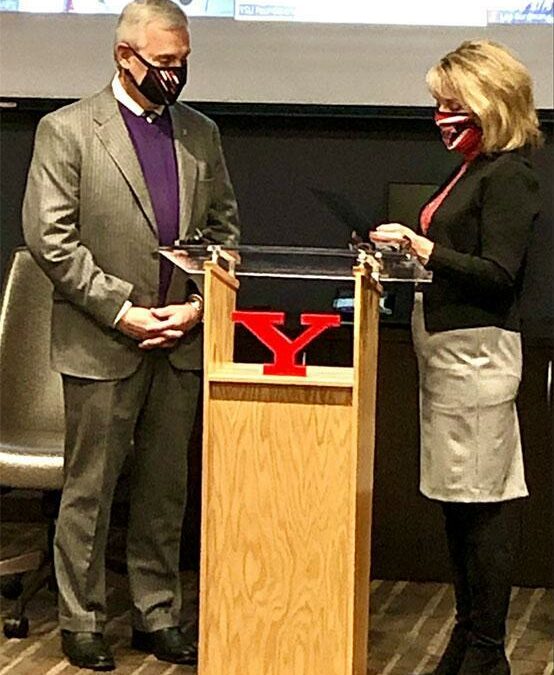 A group of trustees of the Youngstown State University Foundation has raised an initial $1.6 million to establish an endowed faculty or executive administrative position in honor of YSU President Jim Tressel and his 35 years of leadership for YSU and across the region.

“President Tressel’s influence has transformed the institution by raising its stature, reputation and significance to exceptional levels,” said Jocelyne Kollay Linsalata, former chair of the YSU Foundation Board of Trustees.

“His ability to convene diverse groups and engage their support behind regional economic development projects has been a catalytic force behind the Mahoning Valley’s advancement over the past decade.”

The fundraising endeavor was announced today at a news conference at the YSU Foundation on campus. Tressel attended the event but was not aware of the fundraising effort or the naming of the endowed chair.

“This generous effort by some of the region’s most prominent leaders acknowledges and celebrates President Tressel’s long, successful legacy in the Mahoning Valley,” said Paul McFadden, YSU Foundation president. “He represents the very essence of a great leader, a legacy that will now live forever through this endowed chair.” In all, nine YSU Foundation trustees have already pledged $1.6 million to create the endowed chair position.

Now that the initial funding for the endowed chair has been secured, the endeavor will continue to a public phase, allow all members of the YSU community the opportunity to contribute. Based on the level of additional gifts received, the goal is to also create the James P. Tressel Center for Leadership, designed to empower students to make meaningful differences wherever their paths take them. It will support opportunities through credit courses, workshops, leadership projects and more to prepare students to become strong, impactful leaders of the future.

The gift is part of YSU’s $125 million “We See Tomorrow” capital campaign, the largest fundraising efforts in the university’s history.

He came to YSU in 1986 as head football coach. In 15 years, including six as executive director of Intercollegiate Athletics, YSU appeared in the playoffs 10 times and won four national championships. In January 2001, Tressel left YSU to become head football coach at Ohio State University. In 10 seasons, he guided the Buckeyes to the 2002 National Championship and seven Big Ten Championships. After leaving Ohio State, Tressel served as executive vice president for Student Success at the University of Akron, and then returned to YSU in 2014 as president.

Under Tressel’s leadership, enrollment increased for the first time in five years, the academic quality of freshmen classes has continued upward, and graduation rates are up. In addition, the university has set new fund-raising records, held down tuition increases, expanded scholarship opportunities and increased both university and private housing options across campus. He has worked diligently with local, state and federal leaders to boost economic development in and around the region, including major improvement projects along main corridors through campus and workforce development partnerships that include the new Excellence Training Center now under construction on the south end of campus. Tressel has given hundreds of presentations and lectures across the country and has had extensive involvement in fund raising and philanthropy, including personally making a $1 million gift to create the Jim and Ellen Tressel Student Work Opportunity Endowment Fund at YSU.

Tressel’s wife, Ellen, a YSU graduate, is an accomplished businessperson and philanthropist who remains engaged in charitable causes and community organizations in cities where she and her husband have built their careers and raised their family, including Youngstown, Columbus and Akron. She began her financial career in her family’s business in Youngstown and served 17 years as an executive at Butler, Wick and Co.
They are the proud parents of four accomplished adults: Zak, Carlee, Eric and Whitney.