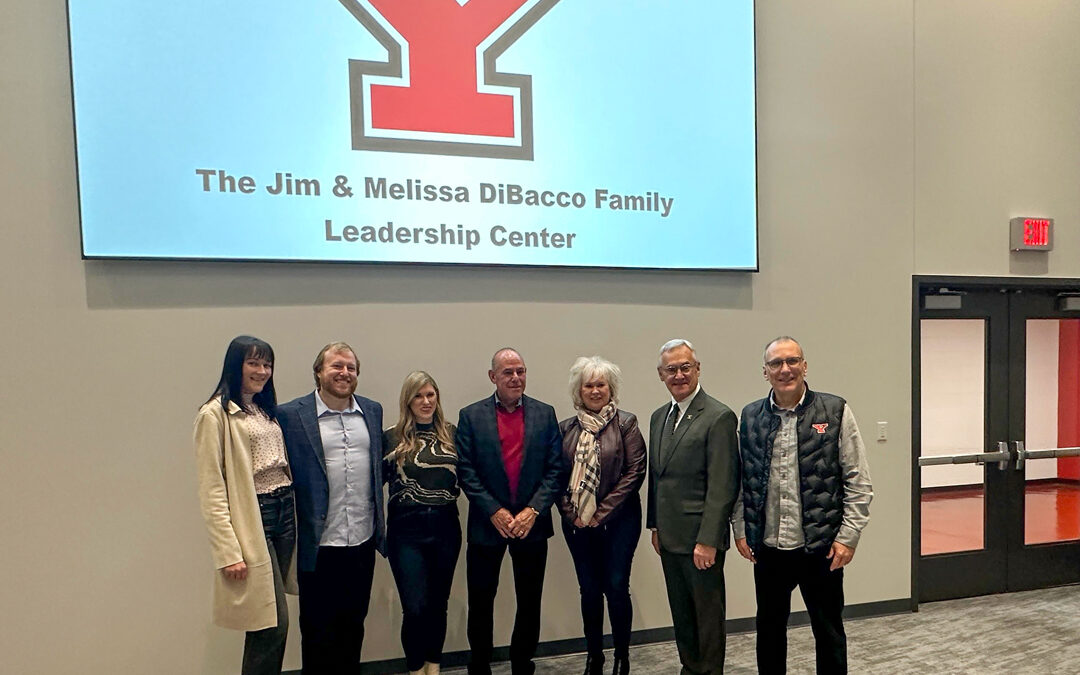 The DiBacco Family Leadership Center features theater-style seating for more than 100, two giant video screens and a state-of-the-art sound system and lighting system. The facility will be utilized by all YSU Athletic teams as well as be a space available to the entire Youngstown State campus.

“Melissa and Jim have been gracious supporters to the Youngstown State community, and we are very thankful that they had a grand vision to make this project become a reality,” Strollo said. “The DiBacco Family Leadership Center is an area our athletics programs and department will treasure and take great pride in. As a campus, this will benefit everyone, and we give our deepest thanks for their generosity,”

The DiBacco Family Leadership Center is the jewel of a recently renovated area in Stambaugh Stadium that features the YSU Athletic Ticket Office, offices for the Baseball and Women’s Lacrosse programs, the newly-created YSU Athletics Digital Media Studio as well as administrative offices.

New signage in the hallway near the Leadership Center celebrates YSU’s all-time conference champions and NCAA qualifying programs dating back to the early 1960’s. Additionally, a listing of the all-time Scholar-Athletes of the Year, a first-class display featuring YSU Football’s championship trophies along with posters representing all current Penguin programs enhance the northwest entrance of Stambaugh Stadium.

The DiBacco Family is proud to contribute to Youngstown State, as they’ve had ties to the community their entire lives. Jim DiBacco began work at Astro Shapes in 1972 one week before he graduated from Boardman High School. He initially started as a line worker and worked his way up to becoming Executive Vice President and a part owner of the company, he retired in 2014 after 43 years at the company. Melissa DiBacco, a Struthers High School graduate, worked at Brentwood Originals for 10 years before retiring to raise their family.

Their two children Brian and Andria are Cardinal Mooney graduates of 2005 and 2007, respectively. Brian graduated from Miami University in 2009. Andria graduated with her bachelor’s at John Carroll University and went on to receive her Master’s in Special Education from YSU.

“YSU is the cornerstone of our community, and it will always be here,” Jim DiBacco said. “This is a way for us to give back to the community.”

The DiBaccos’ have made other significant philanthropic contributions to YSU over the last decade. In the summer of 2018, they made a generous gift to the Rich Center, which is located just east of Stambaugh Stadium. The donation assisted the Rich Center in expanding the physical space of the center, providing additional living and learning spaces for students and expanded programing. They were recognized during a YSU Football game that fall for that contribution.