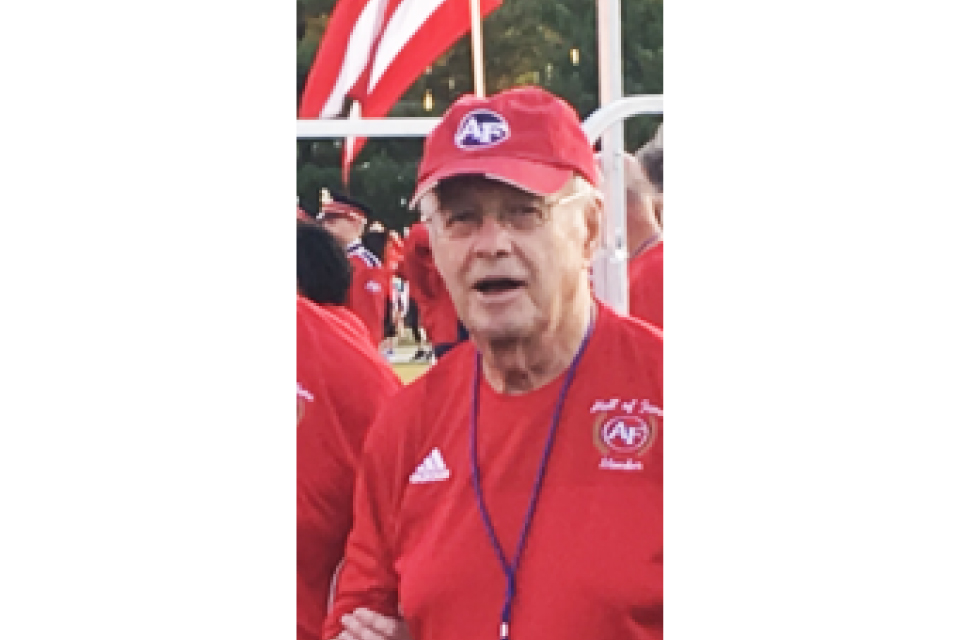 A beloved former coach and Austintown Fitch High School principal will have a scholarship endowed in his name at the YSU Foundation for students at Youngstown State University.

The Robert W. Winterburn Scholarship will be available for Austintown Fitch High School graduates enrolled full-time in business or education. Students must have a minimum 3.0 GPA and may have the opportunity for the scholarship to be renewed through the application and selection process.

Robert is a lifelong sports fan who paved the way for the Jackson-Milton High School Blue Jays as one of the school’s first eleven-man football team members. He graduated high school in 1949 and went on to attend Heidelberg College in 1952 (now Heidelberg University), where he earned his bachelor of education and achieved all Ohio conference and MVP awards his senior year. Robert was also the first in his family to graduate college.

Robert served in the Army from 1954-1955 at Fort Bragg, where he excelled in football and baseball. His passion for sports continued when he began his coaching career at Canfield High School in 1957 through 1959, during which, his team had only two losses in three seasons. He returned to Heidelberg in 1960 as head coach and came back to his roots in northeast Ohio, as head coach for the Fitch Falcons from 1962 to 1965. They were SVC Champs in 1962.

After an accomplished coaching career, Robert received his master of education from Kent State University. He later advanced to senior principal at Austintown Fitch High School from 1972 to 1983.

In an interview with WFMJ in 2018, Robert explained how sports were his life — but his proudest achievement was his four sons, Gary, Tom, Bill and Jim. All of the Winterburn sons were Austintown Fitch High School graduates who excelled in academics and sports under their father’s guidance.

Reflecting on his career, Robert, 88, noted, “I was very fortunate that my high school coach Bud Francis encouraged me to attend college and become a teacher and coach. My good fortune advanced when I was recruited by Heidelberg College to play football, where I earned a bachelor of education degree.”

About the value of academics, Robert added, “…I would not have been able to achieve the success I had in coaching, teaching, and administration without the education I received at Jackson-Milton High School, Heidelberg College and Kent State University.”

It was Tom Winterburn, and his wife, Phyllis, who established the scholarship. Tom was the former vice president of leasing at the Edward J. DeBartolo Corporation, and later became the senior vice president of leasing at Simon Malls and Westfield, two of the largest shopping mall developers in the country. Speaking about reasons for creating the scholarship, Tom said, “This endowment allows me to honor not only my alma maters but also the legacy of my father’s dedication to education in student development through teaching, coaching, and discipline.”

Tom continued, “I have always desired to give back to Austintown Fitch High School and Youngstown State University for the education that allowed me to have a successful 30-year career in the shopping center industry.”

Donations to the Robert W. Winterburn Scholarship can be made at the YSU Foundation website at www.ysufoundation.com under the “giving” tab.
News » YSU Scholarship Created in Honor of Former Coach and Austintown Fitch High School Principal